Finding your own path

I, Charley Morton, time traveler and science geek, have set out to record my interview with the mega-bestselling author of an adult time travel series as part of my "Superheroes of History" project.

When you set up to write a book there are no roadmaps. You have to figure it out for yourself.

Charley Morton: Did you always want to write books?

Diana Gabaldon: One day, at the age of 8, I was having a conversation with God. I said I kind of want to write books that lift people up. God said, yeah, I think that's a good idea.

Charley Morton: So, did you start writing novels right away?

Diana Gabaldon: Not really. You have to understand where I was coming from. My ancestry is both English and Mexican-American; one of my maternal great-grandfathers emigrated from England to Arizona in the late 1800's, while my father's family seems to have been in New Mexico since the late 1500's before Arizona was even part of the United States.

Not that my ancestry, by itself, was an impediment. However, my dad grew up as the 15th child of a Depression-era New Mexico dirt farmer and wanted me to have a practical career, so I got three degrees in science: Zoology, Marine Biology, and a Ph.D. in quantitative behavioral ecology (animal behavior with statistics, don't worry about it.) He wasn't sure any husband I chose would ever be able to support us.

Anyway, I did lab research on birds and fish. I had a post-doctoral appointment and learned to dissect sea birds to reduce them to 15 elements. I learned to pluck a bird and reduce it to a gamete in 3 hours.

Charley Morton: Wait, so you started out as a scientist and author-wannabe? How does that work?

Diana Gabaldon: Science and art are two sides of the same coin. What they both rest on is the ability to draw patterns out of chaos. As a scientist, you need to look at an experiment and say, I think I see what's going on here. When you do science, it's the art of asking questions.

Charley Morton: I see what you mean. With science, you tell a story looking at the evidence to see what it tells you, in a way. And then you let other scientists see if that story holds true, right?

Diana Gabaldon: A novel is much the same-it's postulating a question of some sort. And it should leave you with more questions than it answered. And with books, those unanswered questions are what keeps people turning pages to read on.

Charley Morton: So how do you get from fish and bird biology to Outlander and time travel?

Diana Gabaldon: All my jobs happened by accident. I taught human anatomy and biology at a university and everyone took my class because they thought it would be easy, including the football team. They were always sound asleep.

I was researching boxfish-these are literally bony-armored, box-shaped fish, a very fast swimmer, and how they could speed through water so quickly, which was completely counter-intuitive. I was doing high-speed motion pictures [note: this was pre-video technology].

My husband quit work 3 months after our first child was born to start a business. It took 3 years for that to get going. So, I decided to add to our income. I had to take my fish films to the CBS studios to process, so there I was, near Disney studios. And I had been reading comic books—the writing just seemed to be getting worse and worse, and I just knew I could do a better job. So, I wrote a letter to Disney and they took me up on that. That was my short-lived comic book career freelancing Scrooge McDuck comics.

I was a professor at Arizona State for twelve years or so, in the Center for Environmental Studies. What I actually did there was (weirdly enough) become an expert in the brand-new field of scientific computation—at the time, there were only six people in the world who did what I did. I had taken a class in Fortran, and voila, suddenly, I’m an expert. I then called up magazine editors and offered to write about it. That is, I started sending copies of Science Software around to the editors of the mainstream computer press (along with one of my Walt Disney comic books, just to be sure they looked at my query) asking for assignments–which I got instantly, because at that time, I was one of maybe a dozen people in the world who knew anything about scientific and technical software and could write coherently about it.

Charley Morton: Whoa, so you're a biologist-turned environmental scientist-turned-computer scientist-turned-comic book writer-turned novelist. And a mom to boot! Kind of reminds me of my adventure meeting an 18th century French polymath, the royal court gambler, physicist, philosopher, mathematician and mom, Gabrielle Émilie le Tonnelier de Breteulle, la Marquise du Châtelet. I think you'd like her. She's a kick-butt lady, kind of like you.

Diana Gabaldon: Ah... Emilie, yes! She helped pave the way for women in science, indeed. She would've known some of her contemporaries in Outlander, the real ones, that is.

Anyway, when I turned 35, I decided it was time to get a move on the novel writing—Mozart was dead at 36, after all. On my next birthday, I started writing—just to see what it takes to write a novel. I'd done a lot of writing before, and no one had ever showed me how to do it. I didn't think anyone would read it.  But I didn't know what to write. I thought historical fiction would be good—I knew my way around a research library, after all, and where imagination failed, I could borrow from the record, which seems to work pretty well.

About this time, I happened to catch a "Dr. Who" rerun on television. In this particular episode, Dr. Who picked up a young Scotsman in a kilt from 1745 to join him on his adventure through time and space. I said, well, that man is rather fetching. So, I picked Scotland, 18th century, and that's where I began.

Charley Morton: So, it all started with that hot guy in the kilt! I know what you mean... there's this hot guy, Lex, in my class. "Sexy Lexy," my boy-crazy friend Beth, calls him. But that's a whole 'nother story!

How did this story about a guy in a kilt get to be about time travel?

Diana Gabaldon: I had a minor in English and knew you have to have conflict. I was thinking, what if we set it with the Scots versus the English. If I make the female an English woman for lots of conflict. She shows up amid the English soldiers chasing a band of Scotsmen, who demand to know who she is, and she declares, "I'm Claire Elizabeth Beauchamp. And who the hell are you?" Decidedly not the words of an 18th-century lass, under those circumstances!

She took over telling the story. I said to her, "Fine. Nobody's ever going to see this book anyway. Go ahead and be modern, and I'll figure out what to do with you later."

And 9 books, many novellas, a TV series and 98 million book sales later, the rest is history!

Charley Morton: So, you turned her into a time traveler. How did you make it believable?

Diana Gabaldon: History is all the truth that's written down. If you're good with all the little details of everyday life, really diligent with the historical record, people will follow you over a cliff. So the time travel is incidental.

Charley Morton: For teens like me, who want to do... well, everything... what is your advice?

Diana Gabaldon: I don't like to do things I've already done. My novels are Big, Fat, Historical Fiction, à la James Clavell and James Michener.  However, owing to the fact that I wrote the first book for practice, didn't intend to show it to anyone, and therefore saw no reason to limit myself, they include... history, warfare, medicine, sex, violence, spirituality, honor, betrayal, vengeance, hope and despair, relationships, the building and destruction of families and societies, time travel, moral ambiguity, swords, herbs, horses, gambling (with cards, dice, and lives), voyages of daring, journeys of both body and soul... you know, the usual stuff of literature.

The more experiences you have in life, the better you're able to benefit from them [whether it's writing books or something else]. As for the right path? You have to figure that out for yourself. 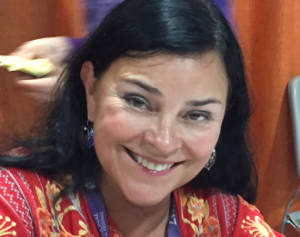 Diana Gabaldon is the author of the award-winning, #1 NYT-bestselling OUTLANDER novels.

The Outlander series is described by Salon magazine as "the smartest historical sci-fi adventure-romance story ever written by a science Ph.D. with a background in scripting 'Scrooge McDuck' comics."

The Battle of Culloden

The last ever battle to be fought on British soil, the 1746 battle of Culloden was the final confrontation of the 1745 Jacobite Rising – an attempt to reinstate a Stuart monarch on the throne of Britain – and is today considered one of the most significant clashes in British history.