I, Charley Morton, time traveler and science geek, have set out to record my interview with the great Renaissance genius—painter, scientist, inventor, engineer, architect, cartographer, anatomist, physician, musician and everything else you can think of—as part of my "Superheroes of History" project.

The noblest pleasure is the joy of understanding.

Charley Morton: Maestro Leonardo, what was life like for you when you were my age?

Leonardo da Vinci: I was pretty much left to my own devices, exploring the world around me, making drawings and studying whatever caught my eye. I taught myself, since I was not allowed to enter formal schooling. My status as the illegitimate son of a member of Florence's semi-nobility kept me out of the academies where citizens of means sent their sons to learn.

Leonardo da Vinci: Girls of means were taught practical arts: sewing, dancing, languages, music. Other girls were too busy cooking, cleaning and caring for the men to spend time learning.

Charley Morton: Wow. Doesn’t seem fair. But...if you had been able to go to school...

Leonardo da Vinci: I might have had my curiosity, my passion, drilled out of me. I do not regret not having formal schooling.

As it was, Nature was my teacher. I explored the caves and hills around Vinci, and later Florence. Birds captivated me—they were free of the bounds of Earth (Charley’s note: what we know as gravity). I sketched what I saw. They rode the wind. I tried to capture that, and noted how wind flowed like water in a stream. Air currents.

And of course, we are all part of Nature, are we not? Once I captured these flows in my notebooks, I could connect them to everything I observed around me: the swirl of a man’s beard. Your lovely curls, madonna.

Charley Morton: (I try to brush my fingers through these tangles) Ugh. My hair’s a mess. But I catch your drift. A curl is a curl, no matter where you find it.

Leonardo da Vinci: And we find it everywhere—tree branches that stretch toward the sun; the seeds of a sunflower. My beard! That shape, of course, my countryman Leonardo Fibonacci famously described mathematically.

Leonardo da Vinci: Of course. Representing Nature’s perfection. It explains the structure of leaves, of lungs, It is the world in perfect proportion. Then I became passionate about creating this perfection mathematically in my painting, using proportion: just as the Greeks did.

Charley Morton: Hence, the golden compass. A clue for me to find you?

Leonardo da Vinci: Perhaps. But you asked me about school. Mine was the School of Life. One had to be creative! Where one thought, one impulse, led me down a path, I used exploration, persevering over obstacles: soon, I could solve the problem.

Today, you might call it ADHD! But I? I had the freedom to follow my nose. To explore. Once I reached adulthood (Charley’s note: this was at 14!) I had to discipline myself to learn from other teachers.

Once I entered the atelier of the famous Maestro Verrocchio, I needed to learn how to draw from live models but I couldn’t see their bones and muscles, things a good artist must capture in his painting. Cadavers were the answer – but the Church frowned on cutting open and analyzing dead bodies. You may have heard that I robbed graveyards to dig up skeletons for analysis: this is, perhaps, apocryphal (definition: made up story; urban myth) tale. This would’ve been too dangerous for someone as known as I—the likes of Savonarola to turn in heretics who dared “steal the souls” of the dead. No, there were professional grave robbers—people in the shadows—I paid them handsomely for their efforts.

Charley Morton: You accomplished SOOO much in your lifetime. What drives you?

Leonardo da Vinci: Time is long enough for those who use it. Curiosity, creativity, a desperate passion to fly from my circumstances into a different world of beauty, of light... (quote) I wanted to invent a better future than the one I was born into.

Leonardo da Vinci: There are many other artworks and inventions I wished to accomplish! My two biggest regrets (if I may) are in failing to make a workable flying machine...

And not getting the commission from Pope Julius II to paint the Sistine Chapel. That he would have tapped that sculptor, Michelangelo, instead of (might I be so bold as to say) the most capable painter of our time? It galls me no end!

Charley Morton: I read somewhere that you were really a pacifist at heart. But yet, you invented, designed or improved on all these weapons: a tank, catapults, missiles and cannonballs. What’s with that?!

Leonardo da Vinci: I lived in a violent time. Italy was not a country—instead, there were Republics instead, comprised of cities like Florence, Rome, Milan and Venice, and the surrounding countryside. They were run by dukes—men who took their titles by force or by birth. Rome was ruled by the Vatican, and even the Popes were drawn from these families, and were often rivals.

The exception was Duke Lorenzo di Medici, my patron, who came from a wealthy banking family and who was, truly, one of the most enlightened leaders of my day—or almost any. They battled each other for title, for land and influence.

But these men paid my salary and, even when I envisioned an invention for the pursuit of progress, they almost always turned it into a weapon of war.

Charley Morton: Is it true you were a vegetarian? Wasn’t that a little unusual back in the day?

Leonardo da Vinci: I have, from an early age, abjured the use of meat, and a time will come when men such as I will look upon the murder of animals as they now look on the murder of men. Ironically, perhaps, the Duke of Milan hired me on as a chef when he lost three of his in a row. But the cuisine of the day was heavy on meats and poultry, and the Duke was not happy with my beautiful vegetable dishes. I, too, was dismissed from his kitchen.

Leonardo da Vinci: It had long since come to my attention that people of accomplishment rarely sat back and let things happen to them. They went out and happened to things. 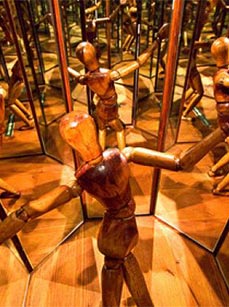 Leonardo loved setting up elaborate games and puzzles to entertain and fool his friends.

Spies lurked everywhere in Florence, but Leonardo had secrets to keep. How'd he do it?

Leonardo was able to work around the clock. What's his secret?

Da Vinci was an inventor, engineer, and mapmaker centuries ahead of his time. Did Leo invent the future?

First Human to Land on Mars!

Forget the man on the moon. Leo was on Mars!