Beauty and Brains: The Most Beautiful Woman in the World Invents the Future

I, Charley Morton, time traveler and science geek, have set out to record my interview with the great pioneering 1940s film star and secret technologist as part of my "Superheroes of History" project.

Improving things comes naturally to me.

Hedy Lamarr: I was born an only child in Vienna, Austria. My father found hours to sit by me by the library fire and tell fairy stories.

Charley Morton: Sounds like you quite idolized your father. Was he your inspiration?

Hedy Lamarr: I am not ashamed to say that no man I ever met was my father's equal, and I never loved any other man as much.

Charley Morton: Would you say he instilled a love of story in you?

Hedy Lamarr: I had a little stage under my father's desk where I would act out fairy tales. I was always talking to myself.

Charley Morton: What about your mom?

Hedy Lamarr: My mother always called me an "ugly weed," so I never was aware of anything until I was older.

I loved beautiful things. I would watch my mother try on gowns, dress her hair, use scents and powders. So early on, I learned the value of pretty things. People called me a "fastidious little thing." Plain girls should have someone telling them they are beautiful. Sometimes this works miracles.

Charley Morton: Growing up, how were you inspired to be an inventor?

Hedy Lamarr: My father used to explain how everything worked—from printing presses to street cars. So perhaps that's where it all started.

Hedy Lamarr: I went to a private elementary school. Those school days were happy ones. I was both foolish and fanciful and fascinated by the cinema. I vowed to everyone that someday I would be a star.

I had chores at home, like everyone else. Taking care of my dog, and the birdcage! And my father and I loved to walk together in the Vienna Woods. I was at an age when I was dreaming of princes and warriors and heroes and such as I read in books.

I took ballet and piano lessons; I have always loved music. I had a governess who taught me German, French and Italian. My parents did not know any actors, or take me often to theatres, but mostly to concerts and operas.

When I was 15, I went to a girls' school in Switzerland. It was very strict. I ran away.

Charley Morton: Is that when you decided you wanted to come to America—and was it always Hollywood?

Hedy Lamarr: I acted my way into it—I got a bit part in a play called The Weaker Sex in Berlin, where I went to study acting. I was to play a "rude American." I was only 16, and my stage husband was an American actor, George Weller. He taught me these popular all-American songs, like, "Yes, sir, that's my baby."

Charley Morton: How did that help you learn how to be an American?

Hedy Lamarr: George came from Boston and we'd sing the popular songs of the day. I studied the song lyrics, writing them down. I had other inspirations, too: I idolized Helen Wills, the Californian who was the number-one ranked woman tennis player in the world. She became the model for my American girl.

Charley Morton: But Europe, at the time, had recently come out of World War I, and there was a new world war in the making in Germany, just next door. That must have been a hard time.

Hedy Lamarr: As a Jewish family in Austria, I know my parents became anxious as I grew up.

But at that time, Vienna was a hub of creativity—Gustav Klimt, who painted our Austrian Mona Lisa. Gustav Mahler, the world-famous composer. Sigmund Freud. Our national Imperial theatre was the stage on which everything in our national life shined. I was born into this world.

Charley Morton: But stage acting in Vienna is still a long way from becoming a famous film actress. What made you believe you would someday make it to Hollywood?

Hedy Lamarr: Confidence is something you're born with. I know I had loads of it even at the age of 15. I applied for a minor part in a film in Vienna and right away I got it and dropped out of school.

It was a little while afterwards that our German director, Max Reinhardt, turned to some Viennese newsmen who were watching us rehearse, "Hedy Kiesler is the most beautiful girl in the world." His words went—how do you say it? —viral.

Charley Morton: Hah! You were a meme before memes were even a thing! What did your parents think about your acting?

Hedy Lamarr: They were bewildered a little but not very surprised. They were never surprised at anything I did. And besides, I had been talking movies for so long that they were really prepared for this. My dear father finally laughed and said, "You have been an actress ever since you were a baby." They were willing to give me this great wish of my heart.

Charley Morton: And was that your heart's desire?

Hedy Lamarr: Oh, I had very big dreams. All creative people want to do the unexpected.

My first husband was very wealthy—an arms manufacturer. He brought me to business meetings to keep me off the stage. That would just not do for the wife of a respectable businessman, you see!

We would entertain very interesting dinner guests—engineers and scientists who talked about advanced weapons—submarines, torpedoes, and aircraft. As things heated up in Germany, his factories ramped up production on many technologies – like radio-controlled communications for submarines. I soaked it all in – although things got dangerous.

I made a little movie which got a lot of attention—he didn't like that. We quarreled quite a bit. It got to be intolerable for me.

Finally, after careful planning, I took my chances. Dressed up in a maid's uniform and carrying as many of my things as I could, I made my escape!

Charley Morton: Wow, that sounds like its own movie plot. Weren't you terrified?

Hedy Lamarr: So much stronger than anything else was my wish to come to Hollywood that I had no fear and—I did it

Charley Morton: So then, it was, like "California, here I come!" And starring in all those old classic movies with famous leading men, back in the day... you'd made it. So, was it smooth sailing after that?

Hedy Lamarr: It wasn't so simple. I escaped to London and there, at a party, I met Louis B. Mayer. He offered me a contract to sign with MGM Studios if I paid for my own way over by steamship. I refused. Ultimately, he offered me more money and I sailed back to America with him and his wife, Margaret. In fact, Margaret Mayer was the one who gave me my new screen name: Lamarr.

Hedy Lamarr: (President John F.) Jack Kennedy always said to me, "Hedy, get involved. That's the secret of life. Try everything. Join everything."

Being the modern girl you are, you will be interested in my other great passion: inventing things.

Charley Morton: Yes! I hear you actually invented the technology that now powers our world!

Hedy Lamarr: But it was not such as simple thing. My technology partner was a Hollywood avant-garde composer, George Anthiel, I met him at a party...

Charley Morton: You seem to meet all these cool people at parties!

Charley Morton: Encryption and automated tracking devices, yes! So far ahead of your time!!

Hedy Lamarr: An object of the invention is to provide a method of secret communication which is relatively simple and reliable in operation, but at the same time is difficult to discover or decipher. It could be used on torpedoes to maintain constant communications, switching onto one of 88 different channels; when the enemy locked onto one channel, they would simply switch to another.

We patented the design in 1942 and offered it at no cost to the U.S. Navy as part of the war effort against the Nazis. They said, "You should go raise money for the war. That's what you should be doing instead of this silly inventing,"

So I did! I told these businessmen and leaders I was just in it to, "chip in and help Uncle Sam win this war." I raised $25 million worth of war bonds. [Charley calculates that would be worth $343 million today].

They put my technology plans in an old filing drawer and forget about it until the patent ran out. And then, someone decided it was a brilliant idea.

Hedy Lamarr: Well I never saw a penny from it. And didn't get any credit, either—Hollywood hid it, too. Afraid it would hurt at the box office for the "Most beautiful woman in the world" to be among the smartest, too.

Charley Morton: Did you feel robbed?

Hedy Lamarr: (With a sparkle in her eye) Making pictures, for an actress, is like betting. Each time you make a picture, you try to analyze why you won or lost. Life is the same.

Finally, in 1977, the Electronic Frontier Foundation (EFF) honored me with its "Pioneer Award." I told them, "I hope you feel good as well as I feel good about it, and it was not done in vain."

Later that same year, I was the first woman ever to receive a BULBIE award, the Oscar for inventors. I was 82.

Charley Morton: Inspiring! You finally got the acknowledgment you deserved—and you have benefited the lives of so many people around the world with your acting, your inventions, and your kindness.

Do you have any last words of inspiration for young people like me?

Hedy Lamarr: The world isn't getting any easier. With all these new inventions I believe that people are hurried more and pushed more... The hurried way is not the right way; you need time for everything - time to work, time to play, time to rest.

Charley Morton: Thank you for that reminder. And this great interview. 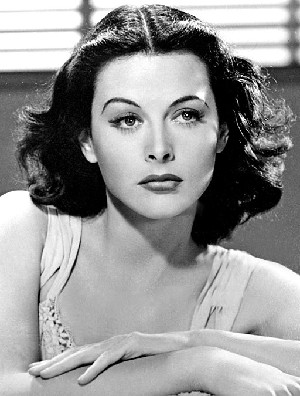 Hedy's impressive technological achievements This impressive combined with her acting talent and star quality to make the most beautiful woman in film one of the most interesting and intelligent women in the movie industry, and a hero of history.

People are illogical, unreasonable, and self-centered.
Love them anyway.

If you do good, people will accuse you of selfish ulterior motives.
Do good anyway.

If you are successful, you will win false friends and true enemies.
Succeed anyway.

The good you do today will be forgotten tomorrow.
Do good anyway.

Honesty and frankness make you vulnerable.
Be honest and frank anyway.

What you spend years building may be destroyed overnight.
Build anyway.

People really need help but may attack you if you do help them.
Help people anyway.